------------------------------------------------------------
SHRI A. K. JHINGRON who held the office of General Manager of the Western Railway prior to his retirement in 2008 recalls the following incident: “I vividly recollect an incident of early 1980s. While working on Bikaner division on Northern Railway, during the course of an inspection of a station, I discovered in a locked room, amongst other things waiting to be condemned (D S Eighted, as called in railway parlance) a wall clock. On closer examination it was found to be a beautiful four feet tall wall clock, manufactured by M/s John Walker & Co., London and Glasgow in the year 1883. The Station Master, finding it old and unserviceable, was in a hurry to get it condemned so that he may get a new digital clock in replacement. My intervention saved the clock and it still adorns the wall of the office of Senior Divisional Operations Manager at Bikaner.”
.
Shri Jhingron’s act of rescue of this remarkable piece of antique treasure is no isolated incident based on the impulse of the moment. It reflects a lifelong passion and fascination with archival material and his preoccupation with preserving the heritage of the railways. Western Railway: Heritage, Traditions and Legend is a distillation of his experience both as a professional railwayman and a rail heritage conservationist, bringing to the reader a vast array of vintage items, richly illustrated and supplemented by a commentary that is both insightful and entertaining.
.
It is said that the student of rail history can approach his subject in one of the following two ways: by a study and perusal of archival material available in railway offices and libraries, or by documenting and seeking out historical details of artifacts that have survived to this day. The first is the approach of the historian, the second that of the archaeologis 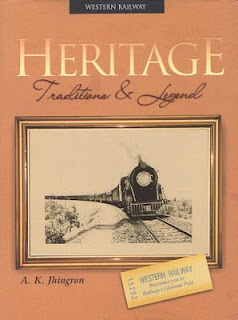 t keen on preserving relics handed down by history. Shri Jhingron has chosen the latter alternative, but appropriately enough, begins his work with a brief exposition of the history of the Western Railway.
.
A substantial part of the system that came to be known as the Western Railway following India’s independence came from that colossal network of lines known as the Bombay, Baroda and Central India Railway. The BB&CI had its beginnings in a short stretch of track about 3.6 kilometers long from Surat to Utran, inaugurated on 10 February 1860. Further extension to the south was accomplished in 1864 linking Baroda with the metropolis of Bombay. The Western Railway system was unique inasmuch as it was made up of three networks of different gauges. The main trunk route was a broad gauge line commencing from Bombay and running northward passing through Surat, Baroda, Ratlam and Kota before joining up with the GIP line at Mathura. Running parallel to this was the metre gauge line connecting Ahmedabad with Delhi together with its offshoots, and finally a closely knit 2 feet 6 inch narrow gauge network spread mostly over the Gujarat area and made up of the Gaikwad’s Baroda State Railway and other systems owned by various ruling states.
.
The BB&CI Railway went from strength to strength with several steam loco sheds and workshops being set up for the maintenance of its ever growing fleet of locomotives and rolling stock. Some of these workshops even took up production work: the broad gauge saloon owned at one time by Maharaja Sayajirao Gaikwad and now on display at the National Rail Museum in Delhi was built as far back as in 1886 by the Parel Workshop of the BB&CI, while the Ajmer Workshop set up in 1877 went on the manufacture saloons, wagons as well as locomotives. Ajmer emerged as a pioneering railway establishment of its time, manufacturing over 460 locomotives before production ceased in 1945.
.
For the average rail enthusiast, the search for heritage all too often begins and ends with steam engines. The author adds sophistication to his approach, bringing together a heady mixture of engines and rolling stock, vintage station clocks and bells, architectural marvels, bridges and railway colonies. The BB&CI Railway head office building at Churchgate, built at the turn of the nineteenth century receives full attention within the text. From here, like a master story-teller, he weaves his theme around the subject of railway office buildings, workshops and residential bungalows before moving on to explore other untrodden paths.
.
Amongst the vast populace of Mumbai, few will be aware that Badhwar Park, the railway officers’ colony, is built over an area where once stood a graceful little station. Colaba railway station was built in 1896 and served as the terminus of the BB&CI Railway for nearly forty years before it was demolished and a new terminal, Bombay Central, set up to cope with the vastly increased traffic. The book provides several such fascinating insights and goes on to describe stations at Bandra, Porbandar, Morbi, Veraval and others, where we come across styles ranging from Saurashtra architecture to forms which clearly bear the influence of colonial type bungalows with their sloping tiled roofs. This chapter has some beautifully crafted sketches in colour. The author’s concern for heritage even embraces abandoned and derelict structures facing the possibility of demolition, and in true archaeologist style he explores the ruins of Jamnagar and Lakhajinagar stations, once fine specimens of station architecture but now lying in rubble and ruins after the Viramgam – Okha route was converted to broad gauge along a different track alignment.
.
Railway heritage preservation has been, until recent years, mostly a grossly neglected concern, but the setting up of the National Rail Museum in New Delhi in 1977, followed in later years by various regional museums across the country appears to be an encouraging sign of progress in this direction. Taking the lead in this field is the Western Railway which has come up with ‘heritage galleries’ at Churchgate, Vadodara, Ahmedabad and Bhavnagar. Each a miniature museum in itself, these galleries open up a window to the past presenting an astonishing variety of railway bric-a-brac ranging from crockery and cutlery used in refreshment rooms to builders’ plates, vintage signalling apparatus, station clocks and bells, archival photographs, models of locomotives and carriages, period furniture and lamps.
.
But important as these items of hardware are, they are not to be thought of as being all that rail heritage stands for. Shri Jhingron adds a pleasing touch by taking us on a ramble through the railway colonies on the BB&CI Railway before moving on to the exciting origins of some of the trains on this railway—and this includes the Frontier Mail—that went on to become legends.
.

Western Railway: Heritage, Traditions and Legend is a pleasure to hold and behold, regal in appearance and classic in style, telling us in quiet words of the timeless treasures of the past. This book is essential reading for anyone seeking material on the railway heritage of India. More than that, it points the way for future rail conservationists to follow.
.

SHRI A. K. JHINGRON joined the Indian Railway Traffic Service in 1971, and has served as Additional Member (Computerisation & Information Systems), Railway Board, New Delhi, before taking over charge as General Manager of Western Railway. Shri Jhingron, a post-graduate in History from Allahabad University is a keen rail heritage enthusiast as well. He has traveled widely recording his findings on heritage railways in Australia and other places in a brilliant series of articles which appeared in Indian Railways magazine. Nearer home, he has pioneered the setting up of the Heritage Gallery at Western Railway Headquarters, Churchgate, Mumbai, and has also authored a book on philately titled “Dak Tikton Ka Safar, Railway Par Vishesh Nazar”.
----------------------------------------------------
To order a copy of this book write to:
The Chief Public Relations Officer
Western Railway
Churchgate Headquarters
Mumbai - 400 020
INDIA
Newer Post Older Post Home