South Eastern Railway: March to New Millennium, by R. R. Bhandari;  South Eastern Railway, Kolkata, 2001; 152 pages, Rs 1000.
--------------------------------------
My first acquaintance with the South Eastern Railway was made on a bleak winter night long ago as I stood on Jabalpur station with a ticket to Seoni. On one side was the broad gauge line stretching away into the darkness, a monstrous engine coughing and heaving as it shunted away a line of carriages. The other side of the platform seemed more friendly with a crowd of people busy chattering away. After a long wait the Jabalpur-Nainpur Passenger arrived. When I clambered in I was relieved to find ample room to sit. The train whistled and moved on into the night and we were soon rattling along through territory unfamiliar to me.

Nainpur, a large narrow gauge junction came late in the night and provided a break. The through carriage I was travelling in was empty now and a pointsman came along and uncoupled the vehicle. The few hours I spent on Nainpur station that night constitute one of the most charming railway experiences I have ever had. Having discovered that I had the whole carriage to myself, I decided to have a late night cup of station tea. The pleasure this gave me is difficult to put into words, for peering out through the window afforded a most spectacular night view, the yard ablaze with three locomotives in brisk steam as though set for action, their headlamps piercing the darkness with dazzling arcs of light. Ah, the pleasures of narrow gauge travel !

The South Eastern Railway is much more than a web of narrow gauge lines; it is a vast network spread over seven states of the Indian union with vertices at Howrah, Vishakapatnam, Nagpur and Katni. It grew out of that revered name, the Bengal Nagpur Railway, the railway that employed Beyer Garratts to haul coal trains over mountainous inclines, that mighty system that would go on to serve steel plants, ports, mines and coalfields, earning for itself a name as the country’s premier steel and coal carrying railway. 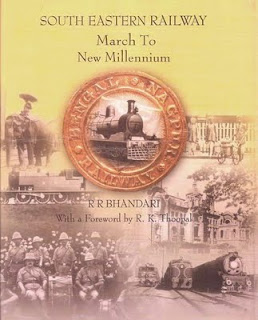 Strange though it may seem, the Bengal Nagpur Railway was not a part of Lord Dalhousie’s original scheme to unite the subcontinent with a network of railways. Following the inauguration of the Bombay-Thana route in 1853, the network of lines began to steadily spread. On the Great Indian Peninsula route, the line slowly inched forward till by March 1870 a through connection had been established between Bombay and Allahabad via Jabalpur, while in an easterly direction, a line branching off from Bhusaval had been laid three years earlier connecting Bombay with the city of Nagpur.

A cursory glance at an atlas will reveal that this scheme left large tracts of land to the south of Howrah, Orissa and the Chhattisgarh province without the benefit of a railway. The impetus to make these regions accessible by rail came when the great famine of 1878 arose, and on the recommendation of the government a meter gauge link called the Nagpur Chhattisgarh Railway was opened in 1882 connecting Nagpur with Rajnandgaon 150 kilometers away, with railway workshops at Motibagh, Nagpur.

Further developments were soon to follow. The year 1887 saw the establishment of the Bengal Nagpur Railway company with Sir T. R. Wynne as its first Agent. The BNR was formed with the express purpose of upgrading the Nagpur—Rajnandgaon link to broad gauge and extend the route through Bilaspur meeting up with the East Indian Railway at Asansol, thereby providing a shorter route connecting Bombay with Calcutta. A branch line from Bilaspur to Katni was also envisaged ; together these two links would open up an avenue for trade between the fertile lands of Chhattisgarh with the rest of India, help in famine relief work, and equally important, provide ready access to various coalfields in the region served by the railway.

Such were the humble beginnings of the Bengal Nagpur Railway. In time, the railway was ‘pushed further and further through the fertile plains of Chhattisgarh’, while on the western side, an extensive network of narrow gauge lines known as the Satpura Lines was built connecting Jabalpur with Gondia, Mandla Fort, Chhindwara and Nagpur, with Nainpur as the focal point of the system.

Interestingly, the locomotive and carriage & wagon workshop in Nagpur had to undergo modifications on two separate occasions within the first twenty years of its opening. Beginning as a meter gauge facility that served the Nagpur Chhattisgarh Railway, the workshop was refitted to handle broad gauge repair when the line to Rajnandgaon was converted to BG in 1889, and thus it remained for over two decades until it was finally decided to set up a comprehensive repair facility at Kharagpur. Spread over an area of 0.61 square kilometers, the Kharagpur workshop became the BNR’s prime overhaul centre undertaking all kinds of work ranging from periodic overhaul of broad gauge steam locomotives to repairs and overhaul of timber bodied passenger carriages and 4-wheeler goods wagons. Following the establishment of the Kharagpur workshop in 1904, the Motibagh Workshop in Nagpur, now made redundant, was altered a second time, this time preparing it for the narrow gauge stock of the Satpura Lines.

Shri Bhandari’s work is a scholarly treatise that takes the reader on a guided tour through the South Eastern Railway archives. The book is replete with facts, figures and tables of technical data ; but Bhandari is careful to intersperse his story with matters of more general interest as when you come upon an account of the difficult terrain, inhospitable climate, and the consequent fever contracted by members of a survey party led by an English engineer, A. C. Newcombe, who was exploring the area around Raipur for a possible rail route at the close of the nineteenth century.

But that is not all. Further on in the text, Shri Bhandari enthralls the reader with a memoir penned by John Mitchell in 1934 telling of his journey from Bombay to Calcutta by Mail. Like the great Frontier Mail of the BB&CI Railway, the Bengal Nagpur Railway introduced in 1900 a fast service known as the Overland Mail connecting Bombay with Calcutta. Old timers often look back with nostalgia, speaking in glowing terms of the speed and the excellent services offered on board this deluxe train. Number 1 Down Mail was to become the hallmark of punctuality and service, a fact attested to in no uncertain terms when John Masters dedicated his Bhowani Junction to the legendary Mail.

“Nagpur at 9.15,”  says Mitchell in his delightful account. "Here we breakfasted. Here too, we left the Great Indian Peninsula system to enter the Western gateway of the Bengal Nagpur Railway, which line will carry us forward to our destination, Calcutta, another 703 miles to the east. . .  The train stopped for thirty minutes to change engines, so I left the carriage to look around. The same medley of crowds dashing hither and thither, the same cries in unknown tongues. . .   As I wandered along the platform I saw something new at every step. The engine was being backed onto its train and I watched the operation with interest. The locomotive, a GS type mail engine shone resplendent in the Indian sunshine, eager for its run to Bilaspur, 257 miles away. I read the builder’s nameplate on the smokebox, ‘R. Stephenson & Sons Ltd., Darlington, England,’ and I felt a new sense of pride in my old hometown so far away. . ."

Shri Bhandari knows how to select his material. He enlightens, teaches, delights, putting forth his ideas with masterly skill, using language that is reminiscent of the style of a dignified English gentleman of the old order. Here is a book that will give hours of pleasure to the enthusiast while being at the same time an authoritative source of reference on the origin and growth of the South Eastern Railway.
..................................
Ravindra Bhalerao
Newer Post Older Post Home