A remarkable feature of the railways of India is the very large number of steam locomotive types that were put into use for various duties over the past hundred years.

The very first engine to arrive in India was christened ‘Lord Falkland’ and on its arrival, began with shunting work at Byculla when the Bombay – Thana line was being built. Manufactured by the Vulcan Foundry of England, this was a 2 – 4 – 0 tender locomotive using saturated steam and employing Stephenson’s Link Motion to actuate the slide valves.

As the railways spread across the country, a wide variety of engines were ordered from various British manufacturers. If there was one thing that marred this scheme, it was the lack of standardization and uniformity of design. Each railway company worked to its own standards and preferences and each ordered locomotives based on design specifications of its own consulting engineering firm. With this bewildering variety of locomotive classes, workshops and sheds were required to maintain huge inventories of spares. The gravity of the situation can be gauged from the fact that in 1923, there were over 500 different classes of steam engines in use on the Indian subcontinent.

The first attempt at standardization was made in 1910 when the British Engineering Standards Association working in conjunction with the consulting firm of Messrs. Rendel, Palmer and Tritton recommended a set of heavy and standard locomotives for goods, passenger and shunting duties. Together with various modifications effected, the most prominent feature of these BESA locomotives, as they came to be known, was the use of Walschaerts Valve Gear in place of Stephenson’s Link Motion used on earlier locos, in order to secure more economical steam distribution to the cylinders.

From amongst the various BESA classes designed at the time, only one, I think, has survived so far, Class HP, which with the addition of a superheater in later years came to be known as HPS. A visit to any large locomotive shed will reveal that although now on the way to extinction, the once famed BESA engines leave behind a remnant that will remain in the memory of locomotive men for a long time to come. I found this to be true when I was moving around the ash cleaning pit during one of my rambles to the shed. There were two pits, one longer than the other. When I asked a fitter about the difference, he said that the larger pit was meant for engines having BESA type ashpans which needed more room for ash-pan men to go underneath.

Back in the maintenance bays of the shed, I had the good fortune of being able to see for myself a loco boiler being washed. The process is a laborious one I am told, requiring a halt at the washout bay of over 16 hours.

I had hoped I would be able to speak to the Boiler Maker Chargeman, but he was not to be seen in the office and on making enquiries I was told he was engaged with Shyamsunder in testing a boiler which had newly been steamed. There is no point in talking to him at this stage, I thought, and slowly ambled aimlessly around. I was intercepted by Harminder accompanied by an elderly man with a dark flourishing moustache. The men were smiling broadly as they walked up to me.

“So how are you getting on with your research project?!” asked the man with the moustache looking me in the eye with amusement.

I smiled back. An introduction was hardly needed, for nearly everyone knew me here. Mr Bhalla, the coal checker, was speaking only in jest; he knew well enough I was not working on any kind of project. But on more than once occasion he had showed an eagerness to help, as had many others. Could it be that these men knew something about me? Maybe they knew they were speaking to an engineering graduate who for want of suitable employment was in temporary service of the District Superintendent of Police. No one had asked me anything so far, my only credentials were my friendship with Harminder.

Soon however, Bhalla and his companion parted company and I was left alone with Harminder. His morning shunting duties over, he had time on hand. We strolled along the bay till we came upon a Class WG locomotive in steam. I was told that the engine had been given a washout, the buffer heights adjusted, the wheel dimensions checked, and upon being steamed the Chargeman and his men were testing the safety valves.

The locomotive boiler is a complex piece of apparatus and like every other engine component, requires frequent attention. During service, salts dissolved in boiler water are deposited as scale on the boiler and firebox plates, as well as the flue tubes which conduct the hot gases from the firebox to the smokebox and thence to the chimney. The main object of the multi-tube form of boiler is to increase the heating surface and thereby effect a greater utilization of the heat generated in the firebox to raise steam. The deposition of scale on the smoke and flue tubes offsets the advantage of this kind of boiler design by lowering the conductivity of the tubes, resulting in less heat being transferred to the boiler water, and therefore more coal being consumed. Regular boiler washouts ensure good steaming quality on the run by removing the accumulation of scale and other undissolved impurities which over time settle at the bottom as mud or sediment.

The firebox itself is of interesting construction. With the exception of the firegrate below, every part of the firebox proper is in contact with boiler water. The inner firebox is surrounded by the outer firebox, and is held in place with stay bolts. The space between the inner and outer fireboxes carries water both at the sides and the top, and this rapidly conducts away heat so that under the action of the fire burning within it, the inner firebox plates can never get so hot as to burn or waste away.

The most comprehensive examination a steam engine boiler undergoes is when it is sent to the parent workshop for periodical overhaul. This is called a Class A examination.

At the sheds, boilers are inspected, adjusted and repaired under the direction of the Divisional Boiler Inspector once every six months in an operation known as a Class B examination. The very last item performed after repairs have been carried out is usually a ‘steam test’ in which the Boiler Inspector satisfies himself that the boiler is in order and is fit for service.

Finally we have a Class C examination in which a boiler is washed, inspected and repaired in the shed at intervals of one month, the operation being performed by the Boiler Maker Chargeman.

The details of the various boiler examinations together with their periodicity is set out in the following table :

During its term of service each boiler is accompanied by a Boiler Life Register containing full details of the condition of the boiler at each of the examinations listed above and the repairs carried out on it.

Mechanical Boiler Inspectors are technical staff of the Mechanical Department and are under direct orders of the Deputy Chief Mechanical Engineer. Unlike Loco Foremen and Chargemen whose duties are confined to the shed, Boiler Inspectors are allotted a certain area and are required to be on the move. The Boiler Inspector arranges his programme of work in consultation with Loco Foremen within his jurisdiction. He must visit various sheds and keep himself informed as to the condition of locomotive and stationary boilers within the shed, and must ensure that every boiler under his charge receives timely attention and repair.

A six-monthly B Class examination requires the Boiler Inspector to make a full examination of the boiler and record details in the Boiler Life Register. In addition he will also fill up a form in duplicate stating the condition of the boiler and the repairs needed on it. One copy of the form is sent to the Divisional Mechanical Engineer, while the other is for the Locomotive Foreman under which the boiler is working.

The Boiler Maker Chargeman, having carried out repairs to the boiler in accordance with the Boiler Inspector’s report, has to jointly certify with the Loco Foreman on the form to the effect that the defects have been attended, and dispatch the duly attested form to the Divisional Mechanical Engineer where it retained as a permanent copy. 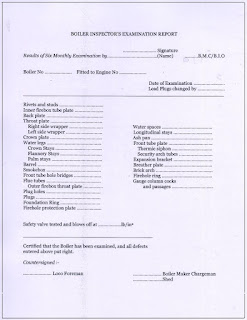 I have been wondering what would be the outcome should a safety valve on a locomotive fail to blow during the run, but Shyamsunder says the possibility of such an occurrence is remote for there are three safety valves provided on an engine each set to blow at a slightly different steam pressure.

There are two items vitally important to boiler safety which are tested at each examination. The first is the engine pressure gauge which is periodically cross-checked with a Master Pressure Gauge to make sure it does not give a false reading. The other item of prime importance is the safety valve. At each boiler examination, safety valves are tested, and repaired if necessary, by the Fitter Chargeman and the Boiler Maker Chargeman together, who record the results of their test on a form, jointly certifying the pressure at which the valve commences to blow.


As for my question as to what would be the result should a safety valve fail to blow on the run, there is ample latitude in this regard I am told, for modern locomotive boilers are made with a Safety Factor of about 5, which means that the thickness of the boiler plates as well as the size and pitch of the firebox stays are calculated to withstand five times the authorized working pressure of the locomotive.
---------------------
Continued below...
Newer Post Older Post Home