ONE REASON WHY MANI'S VISITS are something to look forward to is that he has been something of a Santa Claus of late. Each time Mani (or Shri Abhimanyu Shaunik, if you like) drops in my hometown, he gets along something that whets my appetite for the railways and its doings. Its amazing to see how it can act as a catalyst in my never ending quest for discovering yet another facet of the Railways of the Raj. 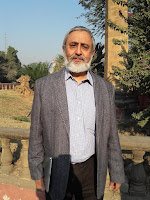 Having dubbed him as Santa, let no one imagine that Mani arrives here at Christmas time dressed in a red cape with white fur trim. Nothing of the kind. Shri Abhimanyu is a top class businessman ; as General Manager of Palas Software Private Limited he is at times required to be on the move, often taking along with him a team of company executives to assist him in his work. Last time he was here he brought along a pair of large coffee mugs imprinted with the Rail Enthusiasts' Society logo. This time it was something more substantial. It was a book called "Steaming On" , a 230 page treatise that would cheer the heart of any steam train buff.

Steaming On couldn't fail to delight me as has every other bit of railway memorabilia Mr Shaunik has got along for me. Here is a book that has not been authored by a single individual ; rather it is a collection of writings that have appeared in the dozen or more issues of the Indian Steam Railway Society's journal. Among its contributors may be found engine drivers and General Managers, writers and photographers, college professors and historians. Each one writes using his own slant, each exhibits his own specialized interest, his own fascination within the limitless vistas of the field known to us by the name of railway heritage. 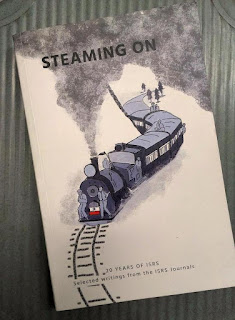 Consequently, Steaming On is free of the monotony we have come to expect in works authored by a single person. Steaming On is a lively voice, a tremendous entertainment where each piece of writing appears to be elbowing out the others in an effort to get the reader's attention. And what a marvellous collection of topics maybe found here! Here at one end we have the scholarly figure of Ranjit Mathur who sets out the facts and figures pertaining to the varied classes of steam locomotives that once ran on Indian soil. If this sounds too technical, we may skip over pages to find members of the Darjeeling Hill Railway Society chattering excitedly over a rare streamlined baby engine that once made its appearance on the DHR many years ago, while still another is here to tell us of his adventures high up in the hills looking for the grave of his icon, the legendary Barog saab who was assigned the task of building the famed Kalka Simla Railway. There is no lack of variety here. Peter Foster may be heard chirping from afar expresing concern over the government's proposal to rename A. H. Wheeler, while Tathagata Chatterji prefers to pen an ode to the BNR Hotel of Puri. Others like the late Mr Kashyap are more down to earth ; having been a driver himself he finds his supreme pleasure in telling us of the long road to travel before a newcomer to a steam shed could hope to man a mainline express engine. And Siddhartha Joshi and Bharat Vohra -- don't they come across as excited youngsters jumping onto the Frontier Mail hoping to catch a glimpse of the last remnants of steam in Mhow? These two boys are desperate ; they are in earnest, and their enthusiasm spills over into theirs writings.

There are others who seem to be calm and collected as they write their memoirs. I liked Harshvardhan's "The End of an Era" where this veteran enthusiast tells us in his own quiet way the tale of two enginemen he knew. Or yet again, we have the late Mr Sinha taking us back on a nostalgic tour of the days when as a trainee officer on the Indian Railways, he would receive practical training on board the footplate of the mighty engine that pulled the Grand Trunk Express.

The Indian Steam Railway Society has been around for over two decades, a sure haven for all those souls who found India's fast disappearing fleet of steam locomotives gave them cause for distress and anguish. The opening chapter of the book tells the tale of how it all began, how a group of enthusiasts met in a hotel room and decided that something needed to be done to rescue the steam age from slipping away into oblivion unsung. Present amongst the group was Shri Ashwani Lohani, then Director of the National Rail Museum, and a keen heritage enthusiast himself. Under the able leadership of this ambitious and enterprising railwayman, then, was born India's first railway heritage society. It was named the Friends of the National Rail Museum as it was conceived as a group mainly concerned with the preservation of the exhibits at the museum. It soon became apparent, however, that the interests served by the newly formed society were confined to a dismally narrow sphere of activity, and that if the cause of railway heritage was to be furthered, it could only be done effectively through an agency whose professed aims went far beyond those adopted by the FNRM.

Consequently, a few years down the line a new society came into being ; it was named the Indian Steam Railway Society and its objectives were to bring together enthusiasts, disseminate knowlege of railway  heritage and insofar as it was possible, help the railways to see the immense potential that lay in running steam services on its tracks.

Like the FNRM, membership of the newly formed steam society never really swelled to large numbers ; it would always remain a small band of loyal followers who sang their ditties to the rails of old. But the society brought out an adorable four-page newsletter crammed with interesting findings in the world of steam locomotion. There were reports on the latest engines being shunted out of duty, memoirs, technical articles, besides various other pieces dealing with sundry railway memorabilia.

The ISRS newsletter was at this time being edited by Shri Harshvardhan, of whom it has been said that he was the "backbone of the steam preservation movement" in those days. Harshvardhan was a keen aficionado of steam railways, a near authority on all that was happening in the world of steam, and his newsletter kept us pretty well informed of anything that took place worthy of note.

At about this time we were also to make a startling discovery ; for the steam railways of India seemed to have cast a spell of charm that went far beyond the geographical boundaries of the country, and there were quite a few living in far away lands who rejoiced, even gloried, in our steam trains. We had David Barrie and Terry Martin of the DHRS arguing persuasively for steam services on the Darjeeling Hill Railway ; there was John King educating us on the varied features of Edmondson tickets to be found in different railway zones across the country ; and who would not be delighted with the memoirs of Reginald Sowler who kept a diary of his rail travels while he served here as a  private in the army during World War II ?

The railway movement had now begun to gather momentum. Members of the ISRS met together at the National Rail Museum each month, and when November came round, everyone looked forward to a fun-packed 3-day steam convention held at the same venue. When Shri Tathagata Chatterji took over as editor, the society newsletter had grown from a puny four page printed handout to a 12 page publication. The time seemed ripe for better things and the society decided to have a proper magazine befitting its status as the country's premier railway society.

The "Indian Steam Railways Magazine" got off to a flying start and there were plans initially to sell copies aboard the Rajdhani express trains. It is worth noting that the ISRS magazine was named in tribute to a well respected publication called the Indian State Railways Magazine which thrived in the 1920s and 30s dedicated to railway matters and tourism ; and indeed, the new magazine carried a feature known as the Treasure Hunt which reproduced in facsimile some of the more striking writings from the latter. 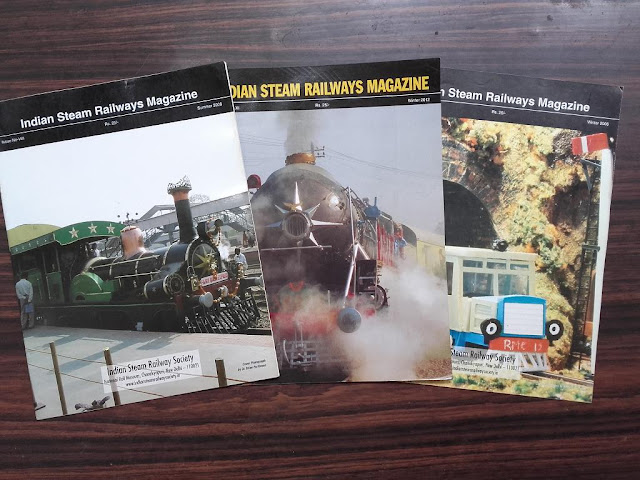 For the heritage enthusiast these years were undoubtedly a time of great excitement. Shri Ashwani Lohani's labours had borne fruit resulting in the Fairy Queen being reconditioned to run tourist specials from Delhi to Alwar, and equally significant, Lohani had conceived and directed the transformation of the disused shed in Rewari into a top class steam loco maintenance facility. These remarkable accomplishments would further spur enthusiasm, and the Indian Steam Railways Magazine faithfully reflected the upbeat mood. Besides the usual features a steam glossary was added to the magazine ; this would be in addition to two very pretty features newly introduced, namely, a half-page devoted to rail humour, and a charming little section called "Echoes of the Past" where readers could send in any railway pictures from their personal archives.

Browsing through old issues of the ISRS journals is an enriching experience opening up a window to railwayland when steam led the way in all its might and glory. That glory and splendour have long since vanished never to return, and yet we may think over it in moments of quiet solitude and rejoice. We may inspect what is being done on the preservation front, we can visit railway museums and heritage galleries, take a trip on steam run tourist specials. Or we may turn instead to books devoted to heritage and history to savour the richness of India's steam age.

Steaming On is a delightful compilation of writings that have appeared in the ISRS journals over the past twenty years, and has been prepared with this object in view. Both the opening of the Rewari Steam locoshed and the launch of the Indian Steam Railways Magazine were important events in the history of the ISRS, and in Steaming On we have yet another milestone we can be proud of.

Some books have a message, others inspire hope. Steaming On seems to do both. As India's steam age drew to a close, it left many distraught, and there were a great many who looked upon the change as a great irreparable loss. To all such folks Steaming On beckons invitingly to share in the adventure. The pretty Darjeeling engine on the front cover speaks to us, inspiring hope : "Never mind what has happened, I will keep Steaming On..." 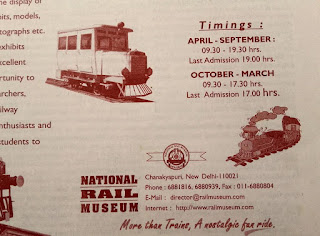