Of Station Clocks and Bells

THE FIRST TIME I looked upon an old grandfather clock, it did not strike a chord with me. It looked ancient, its appearance was ungainly. When it struck the hour, the chimes came low and sorrowful. It seemed to say that time was a slow moving, melancholy business. 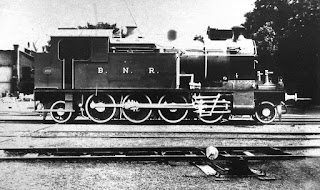 The years wore on. I never did get a chance to see a similar clock again--at least not in a home. Old grandfather clocks have all but disappeared leaving no trace behind. Oh, how we hated to wind up the key each day! Modern battery operated clocks have freed us from this drudgery, but with the passing of mechanical clocks, time itself seems to have moved into a new era. Of the old, nothing is left except for a few scattered indications, a few remnants here and there treasured by discerning individuals as heritage.

And so here I was gazing up with wonderment at a large dial with bold numerals printed on it. The hour and minute hands carried arrowheads pointing unmistakably to the hour of the day. This was not a pendulum clock; it was a station clock made way back in 1900 by Favre Leuba which had served for a good many years on Dabhoi railway station before it was moved to the rail museum in Vadodara. A glorious old time-keeper, spring wound of course, the whole affair enclosed in a majestic dark case of generous size. Being a station clock it needed constant attention, as indeed every clock did. Each day, the station master's attendant must climb up to polish the glass and wind up the key. And when Marconi's invention took the world by storm, it became common practice for each such clock to be set each day to radio time.


Many of these railway clocks are truly old. I have come upon a specimen dating back to 1870 (sadly, didn’t carry along my camera with me!) manufactured by Messrs. John Walker & Company of London, a revered name in wall clocks since the 15th century. Many of these clocks are still in working condition today, their dials still sparkling as though new.

But it really immaterial if a clock is functioning or not, for each is a priceless treasure from an age when the Industrial Revolution had first begun to make its effect felt in the Indian subcontinent. Each has a tale to tell; each has lived through several generations and is a silent witness to social and technological change taking place around.

I then turned my attention to the bells on display. The Vadodara museum had two bells on display made by the firm of J. Warner & Sons, London. But perhaps the most fascinating of all the bells I have ever seen is an old brass one dating back to 1868, hung up beside the Station Master's office on Mahim station. Mahim is an important suburb of Bombay and here hung this ancient piece of brass for over a hundred years. Then times began to change and the old station bells which heralded the arrival of trains with their musical beats were abandoned and forgotten. But it is cheering to note that many of these old bells survive to this day. The Mahim bell was extra special; being the oldest on the B B & C I Railway, it was shifted to the Western Railway General Manager's residence on Altamount Road where it stands as a glorious memento of India's railway heritage.

Like clocks staring down from high up on the platform canopy, bells were an essential part of the working of railway stations. They continued in use even after the arrival of public address systems, and were used at wayside stations to inform passengers of the arrival and departure of trains.

The Great Indian Peninsula Railway Rules states that “... for passenger trains the Station Master will give permission to the Guard to start the train either personally or by having the station bell rung according to the prescribed code or giving a green hand signal to the Guard... ” 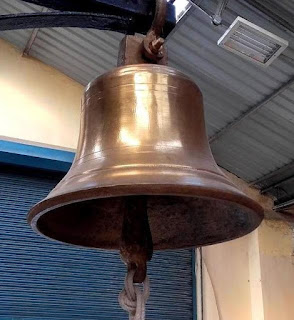 What precisely is the code for ringing a station bell ?

Here again is an excerpt from the GIP Railway Rules:

“...  When a train carrying passengers is due to leave and all work in connection with it is finished, the Station Master shall authorize the station bell to be rung except between the hours of 22 and 6 as follows:

One beat for starting a down train, two beats for an up train, and four beats for a branch line train.

At all stations, except on the Bombay Suburban section, sharp continuous beats shall be given on the station bell to announce the approach of a stopping train... ”

"...The following warning and starting bells are sounded at stations for the information of the travelling public when a train carrying passengers is ready to start:

At stations where passenger trains stop for more than 5 minutes, in addition to the starting bell, a warning bell is sounded 5 minutes before starting time ....  7 strokes. "

Bells are among the prettiest remnants of India’s railway heritage. Their charm no doubt arises from the connection with a church, as well as their association with Christmas. And a good many do survive on railway stations even today.

With modern technology taking over, station memorabilia has become an endangered species, and many large stations will be found to have succumbed to modernization to such an extent that very little of the old remains except perhaps the station building itself. But all is not lost. Hidden away in chambers and offices, one may stumble upon a long sought-after antique, a priceless rail artefact that warms the heart and brings back nostalgic memories of the past. Rail historian Rajendra Aklekar has made it his province to explore such remnants in the Bombay area, and has come upon an enormous amount of treasure, untapped and lying neglected. His discoveries may be found listed in his book Halt Station India, together with a good deal of history. Among the many fascinating discoveries made by this avid explorer is F. W. Stevens' original furniture--decorative tables, chairs, desks and cupboards with GIPR carved on them--furniture that is still in use in the offices of Victoria Terminus, the headquarters of the erstwhile Great Indian Peninsula Railway in Bombay. 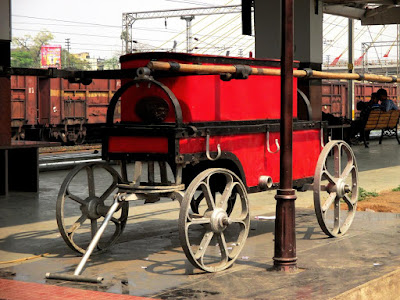 Aklekar also tells us of fire buckets in the corridors of the Victoria Terminus, manufactured by Merryweather & Sons, that grand old English firm which began production of fire equipment in 1692. Oh, how I wished I could get to see some of these old fire buckets! By a lucky happenstance, I found what I was looking for closer home. Nagpur Railway station has something today which will cheer any rail heritage buff. On the orders of a Divisional Railway Manager, the very last platform towards Santra Market side has been designed as a "heritage gallery". Among the handful of heritage items scattered across the length of the platform is an old fire pump manufactured by Merryweather & Sons of London. Grand old vintage stuff ! The pump is manually operated by a pair of wooden handles which operate pistons in a pair of cylinders to pump out water to douse the fire. 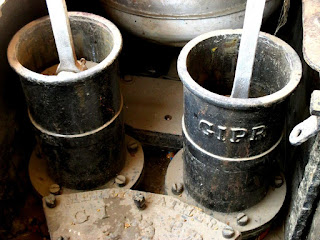 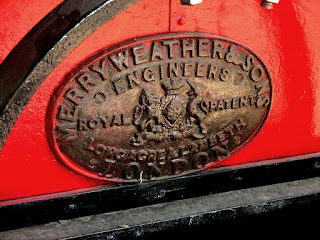 It appears at least four men would be required to operate the pump, but I can't be sure where the water is stored -- probably within the large red case itself. 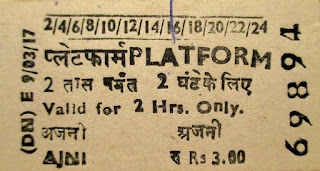 Station memorabilia makes interesting study. Bill Aitken once suggested it would be an instructive experience for a rail enthusiast to board the Agra Passenger from Delhi , getting off a stations enroute to explore rail heritage lying around in station offices. His remark was made several years back; today it is doubtful if any such heritage item would be seen lurking around in Station Masters’ offices. We are, of course, speaking of Edmondson ticket machines. With computerized tickets now universally in use, these quaint old date stamping machines have all but disappeared, and may be found only at tiny stations on routes that still issue card tickets.


Here is another example of station memorabilia, a platform weighing machine from H. Pooley and Sons of Liverpool, England. Henry Pooley & Son was established in 1790 to manufacture scale beams. By 1835 they had begun to make platform scales. Business continued till in 1913 the firm was absorbed by W. & T. Avery Limited. So Pooley & Sons have been in the business for a long time, being the forerunners of Avery Limited. Here then is a  piece of platform machinery that can be said to be truly vintage in character! 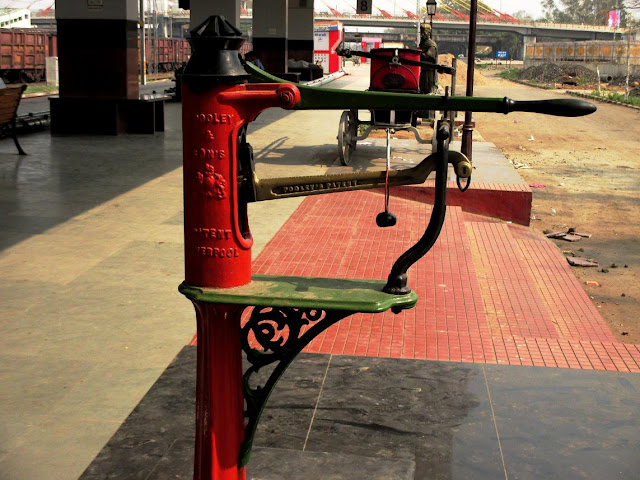 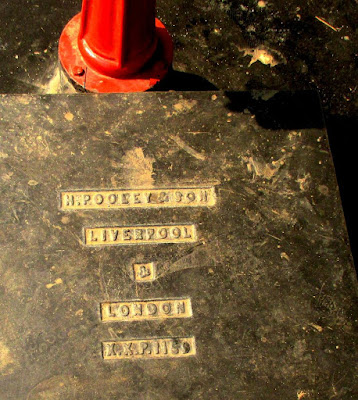 When Victoria Terminus station was opened in 1888, it was lit by incandescent gas lamps, as were many other early stations of the time. But kerosene lamps were in universal use too, and here is a fine example of what a wall lamp those days looked like. We have no information where this lamp was employed. It might have been fixed on the wall of a Station Master's office, or maybe a waiting room... 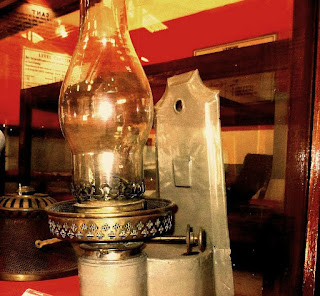 And here's a lovely hurricane lantern below. How could the railways have ever functioned without lamps and lanterns?! Why, the whole signalling system relied on kerosene lamps to indicate signal aspects by night. This lamp comes from the Accident Relief Train stabled in Motibagh in Nagpur. It conjures up in a marvellous way the age when stations were lit with oil and trains run on steam. 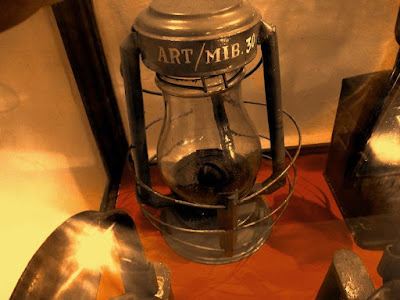